You are here:
Education 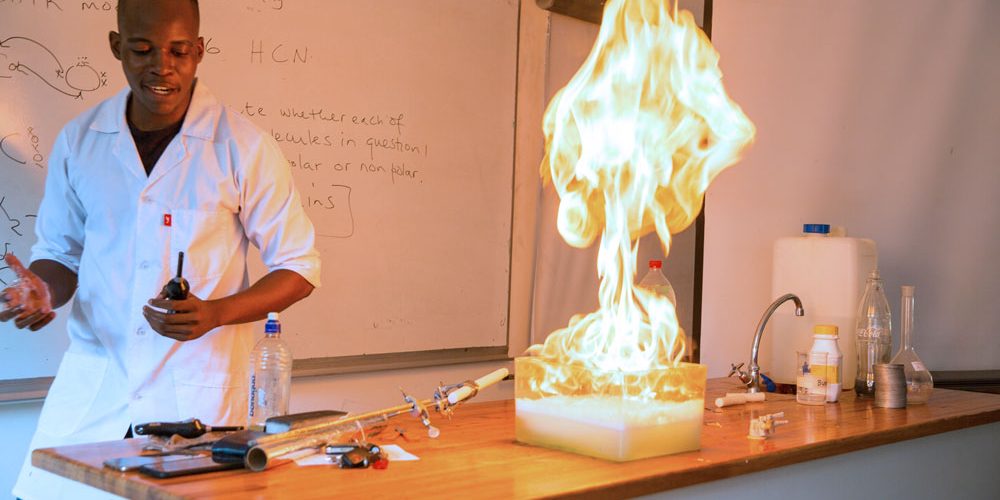 At the age of 26, a bright and dedicated scientist, with a profound love for pure science, is ensuring the Foundation continues to be a leading light in SMART education. Satisfied obtained a BSc in Physics and Chemistry at the University of Venda. On completion of his Honours Degree in Chemistry he joined the Palabora Foundation as a volunteer from the South African Agency for Science and Technology Advancement (SAASTA) in 2015.

Satisfied Chabalala working with his students in the science lab.

The Foundation appointed Satisfied as a Lab and Internet Operator in May 2016, based at the Rixile Centre in Lulekani. Here, his career plans are taking an exciting turn, partly because he cannot let go of an innate drive to study, and also because he is seeing the impact of the Foundation’s work.

In his experience children are often scared of science, or believe it is just for the ‘smarter’ children. Most of the time their first contact with science is at school and then those who do want to learn further, often choose an applied science like engineering or a medical profession. In time, Satisfied plans to do a masters degree in education, that, together with his increasing experience and insight, will allow him to give back; both to the children and to science.

Satisfied started science shows for higher grade primary school pupils, focusing on subject matter they are familiar with. The whole idea is to have experiments that are interesting, fun and trigger the children’s ‘wow’ buttons. He uses everyday objects from balloons, household detergent and candles to water and soap to bring the experiments and science closer to home. “I love doing the shows, especially when I see amazement and wonder on the faces of learners. When we discuss the experiments I can gauge their level of understanding of the process,” he reports. Sometimes the children think it’s magic and Satisfied’s joy peaks when he sees the moments of insight emerging from the discussions they have after each experiment.